Google has a blog. It’s been a long time coming, considering Google owns Blogger. But here’s what MeFi has to say about it:
Today’s entry on the Google blog was altered in a subtle way. The earlier entry boasted of their Bangalore data center, but the afternoon’s version now features the Zurich center more prominently and relegates Bangalore to a footnote. Could it be that the company is a little less boastful in their handling of the outsourcing debate than they thought they could be?

Raapi has been posting updates of a “true” “love” story. With main characters generically named Laxmi and Srini, and a contemporary backdrop of a Coffee Day(check out the weird couple on the right), it could be a coming-of-age story of EveryMan, including you.

BTW, What’s up with Nilakantan’s blog? I have to confess that I miss the rantings of a pretty weird individual… 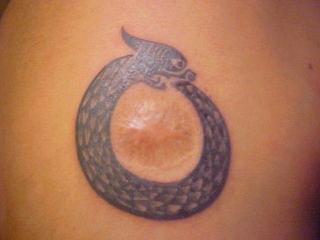 I guess the decision to get a tattoo was on an impulse. Choosing the tattoo – I wanted something to do with the dichotomy of life – its ups and downs, the pain and the pleasure, the sadness and the happiness. I thought it would be cool to get a yin-yang on my small-pox vaccination scar, but the tattoo guy vetoed it. I also had the Ouroboros in mind, so I decided to go with that. I trawled the Net for suitable ouroboros pictures and came with 4 possible ones. One was a simple no-frills image. The second was an aztec symbol for the O, and looked really cool. The third was something I picked off a Chakra-NewAge site that looked vaguely oriental/indian. The fourth was a totally chinese dragon-looking thing. I picked the Indian looking thing because it seemed to be intricate and within my budget($150).

I finished work and went home and grabbed a bite. I arrived at the parlor 10 minutes late. My friendly neighborhood tattoo artist was a big biker guy called “Big Al” with a bald head, a goatee and fierce tattoos all over his arm. I couldn’t have been tattooed by a more cliched figure!

Al had replaced the intricate details of the snake’s body in the blueprint with scales since they were too intricate to be tattooed. I was a bit apprehensive about scales looking good. He told me replacing the scales with a celtic-looking design would take too much time, so I just decided to go with the scales. He also told me it would only cost $100, which was fine and dandy by me.

After signing the required form, I went downstairs with Al. Not surprisingly, Big Al was a big Iron Maiden fan. His room was filled with bloody skulls (not real ones, of course) and iron maiden action figures. After cleaning up my arm and shaving any excess hair, he started in earnest.

I braced myself for the pain. I had read different accounts of tattoos and none of them indicated it would be too painful… and it wasn’t(unless you’re a big pussy). The initial sting is similar to a syringe being injected or a red ant’s bite. The first few markings of the tattoo gun are uncomfortable, then your endorphines kick in and it just feels like someone’s scratching you very hard.

Al started marking the outline with a smaller needle and completed it in 20-25 minutes. Then he replaced it with a broader needle (you could tell by the whine of the gun) and went to work on the shading part. The snake head looked great after shading. He did good work on the scales too, giving each of them a slight shade so that it looks 3D. He was finished in another 20 minutes. He didn’t talk much, neither did I. I guess that was his preferred method of working , and it was my preferred method of being worked on too.

After finishing, he wrapped my arm up in clean bandage and gave me after-tattoo care tips. Looks like I have to wash the tattoo area gently for at least 2 weeks. The skin usually does some peeling off in a week and he told me to be ready for that and not scratch the area. I thanked Al for the great work, bought some ointment and left the premises.

There it is – I now have a permanent mark on my left shoulder. Do I feel liberated or different in any way? Not really. I had made the decision and had decided to go through with it. Has my attitude changed in any way? I certainly don’t feel any more hardcore than I used to. The only justifications I have now are the same reasons I decided on the ouroboros in the first place.

***Update***: A lot of searches hit this page looking for ouroboros symbols. Here’s what I’ve managed to salvage from the dead links.