Here’s another reason why Canada rules – Smart cars. I thought the car I had spotted during my trip was a custom-ordered model. I was planning to google it up but had no idea what it was called. In one of those happy coincidences in life, it turned up on MeFi today. Turns out the smart car is marketed in Canada exclusively and outsells Minis and Beetles.

The last line of the article was particularly apt. It took all my motor skills to drive at 70mph and get a proper picture of the Smart Car. 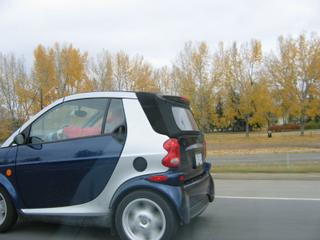 He wore black. He had white hair. And he had a square face. Except for the glasses and his height, he looked a lot like Johnny Cash. He was going to drive me to the airport.

It was a sunny day; as sunny as it gets in October in Calgary. Being the only two people on the bus, we found common ground on the time-tested subject of Weather. Johnny Cash told me of the drought six years ago, when all the grass was burnt to a crisp. He spoke of the melting ice-caps and the extreme phenomena all around the world. 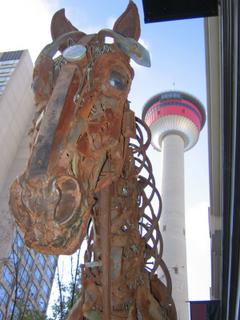 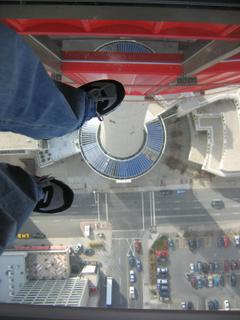 “It says in the Bible that Man will destroy himself.”, he said. “Yes, but we can’t just give up”, I said. He softened. “That’s true, we just have to live it one day at a time, and that’s what we do.”, he said. I agreed, and I arrived at my gate. 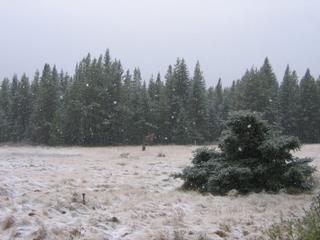 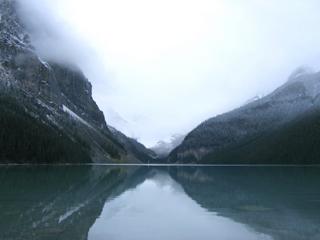 While I was there, it snowed. After a while, the sun shone. It could be the next ice-age in a few decades, or global warming could melt the ice-caps into oblivion; but looking at the lake, it felt good to live today.