See if you can get all the movie references… (video takes a long time to load).

The second part of my picks for the east-asian film genre are much less shocking than their Japanese counterparts, yet they are wonderfully strange and must-sees for anyone who’s looking for some variety in his/her weekend viewing.

1. ‘Spring, Summer, Fall, Winter… And Spring’: One of the simplest but most beautiful movies I’ve ever seen. I would compare it with ‘The Seventh Seal’ for its straight-forwardness but the amount of monologues, dialogues and conversation in ‘Spring, summer…’ is much, much lesser. There are no flashy gimmicks, no technical wizardry. If there was a movie that could be called the perfect Buddhist film, then this would be it. Much of the story takes place on a lake. The lake with the surrounding scenery becomes a metaphor for life. If you don’t want any surprises in a film, but a linear, no-frills story that speaks to you in powerful, simple ways, then this is the one for you.
My Rating:

2. ‘3-Iron’: Another movie by the director of ‘Spring, Summer…’, Kim Ki-Duk. Kim takes on the weird this time, and plays with ideas that are bizarre but pleasing at the same time. A hero who never speaks with the heroine, more buddhist imagery, and death by golf-balls – these are the elements that make this a delight to watch.
My Rating:

3. ‘Oldboy’: I saved the best for last. It’s the movie Tarantino would’ve made, if Tarantino had been a philosophy professor. The director of Oldboy, Chan Wook Park, used to be one and it shows through in his creation. It’s as exciting as a whodunit, but the story revolves around the whydunit. When the revelation comes, you realize that no one has gone this far before. Even if the setup seems too fantastic, the payoff in terms of action and style is well worth it.
My Rating:

Occasionally, I browse the forums on Rottentomatoes, where everyone’s an armchair film critic and rates movies, as if it mattered to the rest of the world what he/she thought about ‘Madagascar’. For example, in this deep thread about Colin Farrell’s and Vin Diesel’s acting credentials: 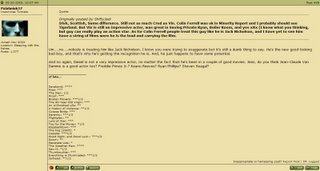 I figured it’s time I rated my own list of movies, and I wanted it to be about ones that come from a certain portion of the world: East Asia. We’ve all seen the Ringu’s and the Grudge’s and the Dark Water’s that get remade, but there’s a whole slew of them that are just too disturbingly strange to be forgotten.

1. ‘Audition’: My first Takashi Miike film. What starts out as a romantic melodrama, turns into an absolute nightmare halfway through. Miike uses an interesting gimmick at the end. In horror movies, there’s usually a scene that’s extremely scary, but turns out to be a dream. In Audition, he does the reverse, and uses an idyllic dream sequence in the midst of … well, you have to watch it.

What I learnt: When a cute Japanese girl says ‘Kuru Kuru Kuru’ to you, STAY AWAY!
My Rating:

2. ‘Ichi the Killer’: Miike’s obsession with the Yakuza continues, and the movie’s filled with blood and gore, the way Quentin Tarantino’s movies are not; the blood-letting is not fun to watch. Here’s a review that summarizes the movie well.

What I learnt: Man-seed can be put to creative use in the opening credits sequence of a movie.
My Rating:

3. ‘Visitor Q’: If you’ve watched this , you can be sure that all other exploitation movies made in the future will pale in comparison to the number of taboos depicted and broken in this single one. The strangest thing about Visitor Q is that the actions of the characters make perfect sense in the logic of the movie. Beneath the jaw-dropping scenes, lies a logical solution to a family crisis.

What I learnt: Necrophilia, coprophilia, incest, and a lactation fetish can make a perfectly sweet ‘family’ outing.
My Rating: